“If I look confused it is because I am thinking.”

After reading this chapter you will be able to:

Let’s create a dataset where one of the predictors, \(x_3\), is a linear combination of the other predictors.

What happens when we attempt to fit a regression model in R using all of the predictors?

We see that R simply decides to exclude a variable. Why is this happening?

If we attempt to find \(\boldsymbol{\hat{\beta}}\) using \(\left( \boldsymbol{X}^T \boldsymbol{X} \right)^{-1}\), we see that this is not possible, due to the fact that the columns of \(\boldsymbol{X}\) are linearly dependent. The previous lines of code were not run, because they produce an error!

When this happens, we say there is exact collinearity in the dataset.

As a result of this issue, R essentially chose to fit the model y ~ x1 + x2. However notice that two other models would accomplish exactly the same fit.

While their fitted values are all the same, their estimated coefficients are wildly different. The sign of \(x_2\) is switched in two of the models! So only fit1 properly explains the relationship between the variables, fit2 and fit3 still predict as well as fit1, despite the coefficients having little to no meaning, a concept we will return to later.

Looking at the seatpos dataset from the faraway package, we will see an example of this concept. The predictors in this dataset are various attributes of car drivers, such as their height, weight and age. The response variable hipcenter measures the “horizontal distance of the midpoint of the hips from a fixed location in the car in mm.” Essentially, it measures the position of the seat for a given driver. This is potentially useful information for car manufacturers considering comfort and safety when designing vehicles.

We will attempt to fit a model that predicts hipcenter. Two predictor variables are immediately interesting to us: HtShoes and Ht. We certainly expect a person’s height to be highly correlated to their height when wearing shoes. We’ll pay special attention to these two variables when fitting models. 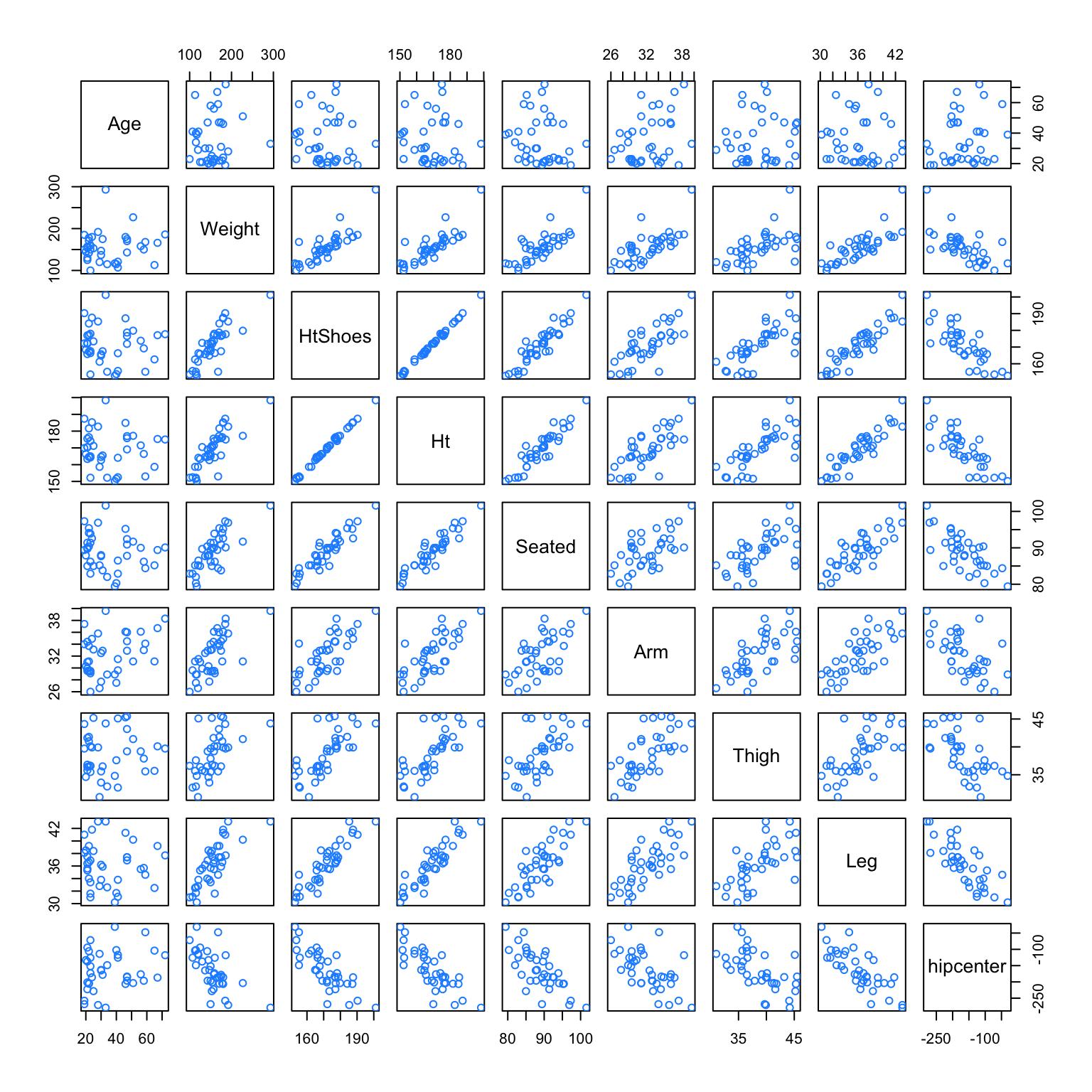 After loading the faraway package, we do some quick checks of correlation between the predictors. Visually, we can do this with the pairs() function, which plots all possible scatterplots between pairs of variables in the dataset.

We can also do this numerically with the cor() function, which when applied to a dataset, returns all pairwise correlations. Notice this is a symmetric matrix. Recall that correlation measures strength and direction of the linear relationship between two variables. The correlation between Ht and HtShoes is extremely high. So high, that rounded to two decimal places, it appears to be 1!

Unlike exact collinearity, here we can still fit a model with all of the predictors, but what effect does this have?

One of the first things we should notice is that the \(F\)-test for the regression tells us that the regression is significant, however each individual predictor is not. Another interesting result is the opposite signs of the coefficients for Ht and HtShoes. This should seem rather counter-intuitive. Increasing Ht increases hipcenter, but increasing HtShoes decreases hipcenter?

This happens as a result of the predictors being highly correlated. For example, the HtShoe variable explains a large amount of the variation in Ht. When they are both in the model, their effects on the response are lessened individually, but together they still explain a large portion of the variation of hipcenter.

Here we see that the other predictors explain \(99.67\%\) of the variation in HtShoe. When fitting this model, we removed hipcenter since it is not a predictor.

This gives us a way to understand how collinearity affects our regression estimates.

The vif function from the faraway package calculates the VIFs for each of the predictors of a model.

In practice it is common to say that any VIF greater than \(5\) is cause for concern. So in this example we see there is a huge multicollinearity issue as many of the predictors have a VIF greater than 5.

Let’s further investigate how the presence of collinearity actually affects a model. If we add a moderate amount of noise to the data, we see that the estimates of the coefficients change drastically. This is a rather undesirable effect. Adding random noise should not affect the coefficients of a model.

Adding the noise had such a large effect, the sign of the coefficient for Ht has changed. 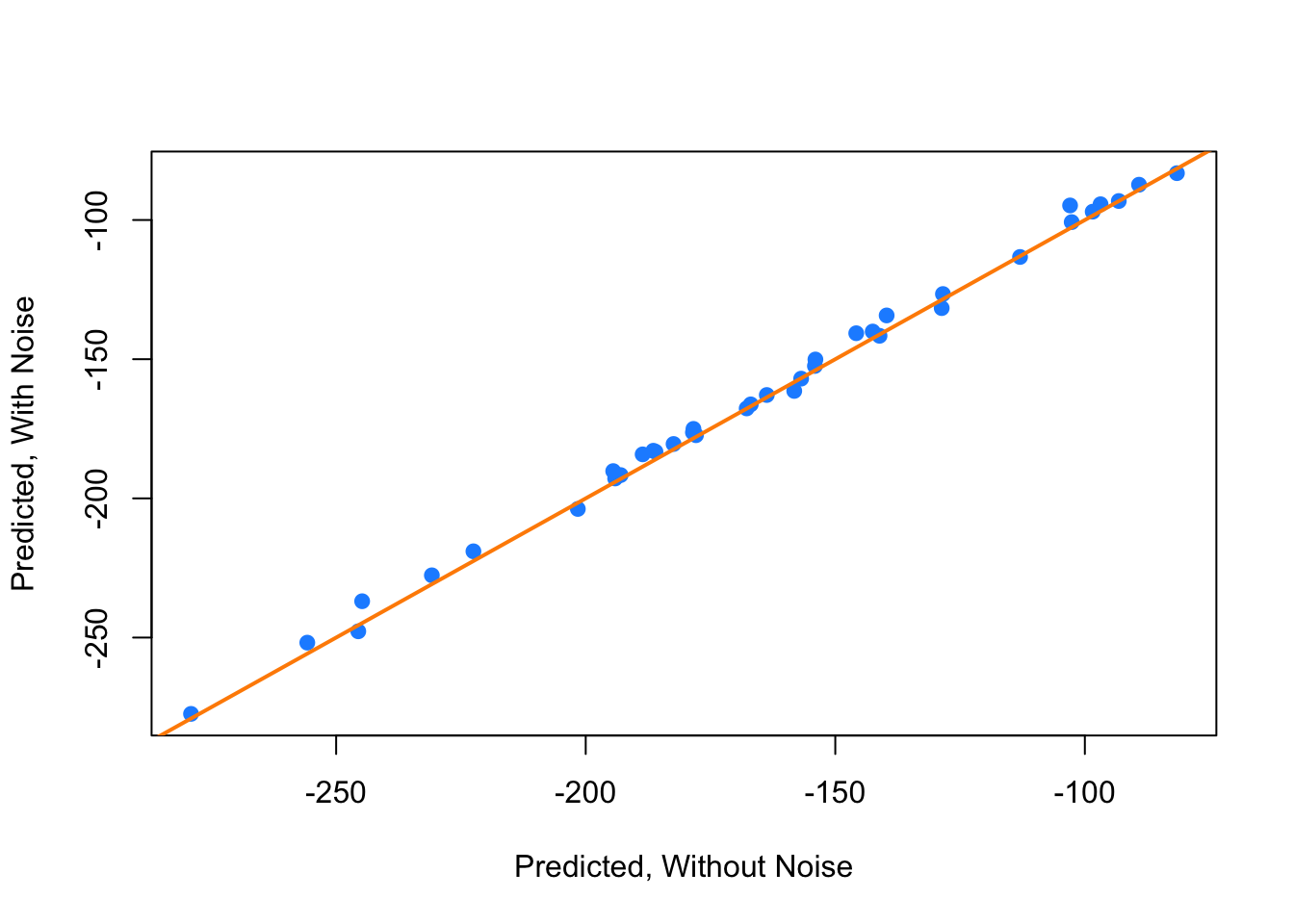 We see that by plotting the predicted values using both models against each other, they are actually rather similar.

Immediately we see that multicollinearity isn’t an issue here.

Also notice that using an \(F\)-test to compare the two models, we would prefer the smaller model.

We now investigate the effect of adding another variable to this smaller model. Specifically we want to look at adding the variable HtShoes. So now our possible predictors are HtShoes, Age, Arm, and Ht. Our response is still hipcenter.

The correlation of these two residuals gives us the partial correlation coefficient of HtShoes and hipcenter with the effects of Age, Arm, and Ht removed. 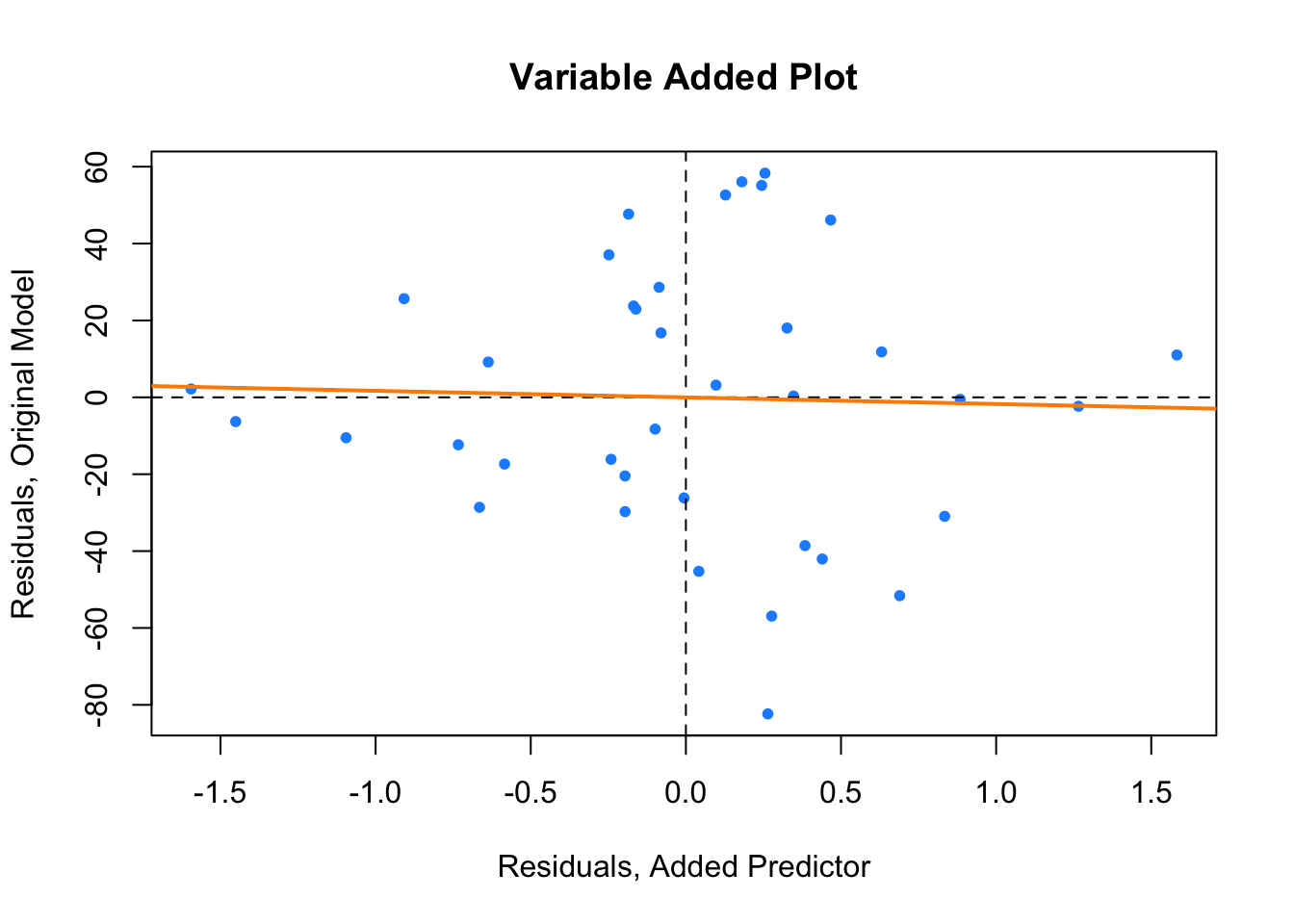 Here the variable added plot shows almost no linear relationship. This tells us that adding HtShoes to the model would probably not be worthwhile. Since its variation is largely explained by the other predictors, adding it to the model will not do much to improve the model. However it will increase the variation of the estimates and make the model much harder to interpret.

Had there been a strong linear relationship here, thus a large partial correlation coefficient, it would likely have been useful to add the additional predictor to the model.

This trade-off is mostly true in general. As a model gets more predictors, errors will get smaller and its prediction will be better, but it will be harder to interpret. This is why, if we are interested in explaining the relationship between the predictors and the response, we often want a model that fits well, but with a small number of predictors with little correlation.

Next chapter we will learn about methods to find models that both fit well, but also have a small number of predictors. We will also discuss overfitting. Although, adding additional predictors will always make errors smaller, sometimes we will be “fitting the noise” and such a model will not generalize to additional observations well.

Here we simulate example data with and without collinearity. We will note the difference in the distribution of the estimates of the \(\beta\) parameters, in particular their variance. However, we will also notice the similarity in their \(MSE\).

We will use the model,

We will use a sample size of 10, and 2500 simulations for both situations.

We’ll first consider the situation with a collinearity issue, so we manually create the two predictor variables.

Notice that they have extremely high correlation.

We perform the simulation 2500 times, each time fitting a regression model, and storing the estimated coefficients and the MSE.

Now we move to the situation without a collinearity issue, so we again manually create the two predictor variables.

Notice that the standard deviations of each are the same as before, however, now the correlation is extremely close to 0.

We then perform simulations and store the same results. 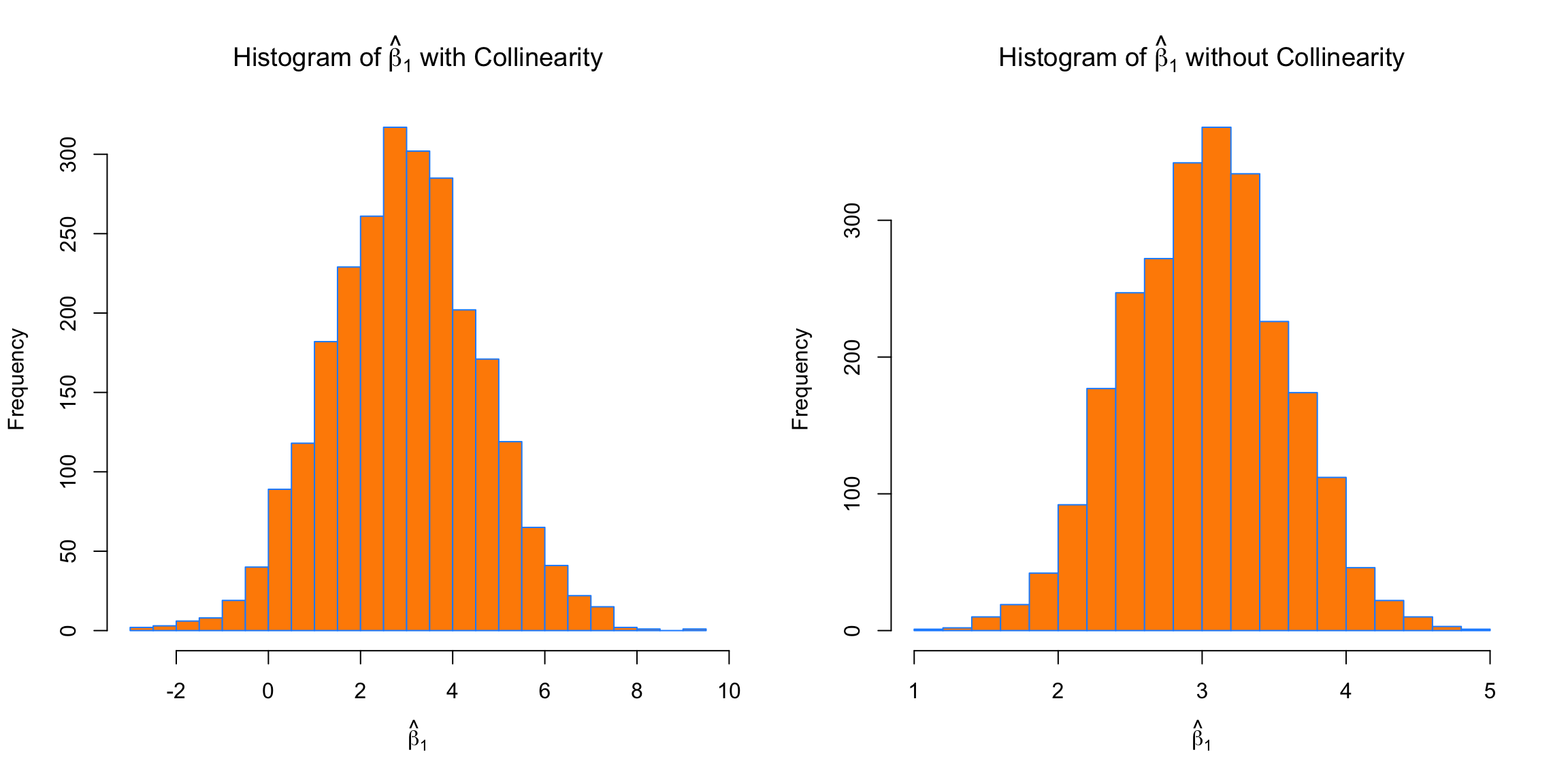 We see the same issues with \(\beta_2\). On average the estimates are correct, but the variance is again much larger with collinearity. 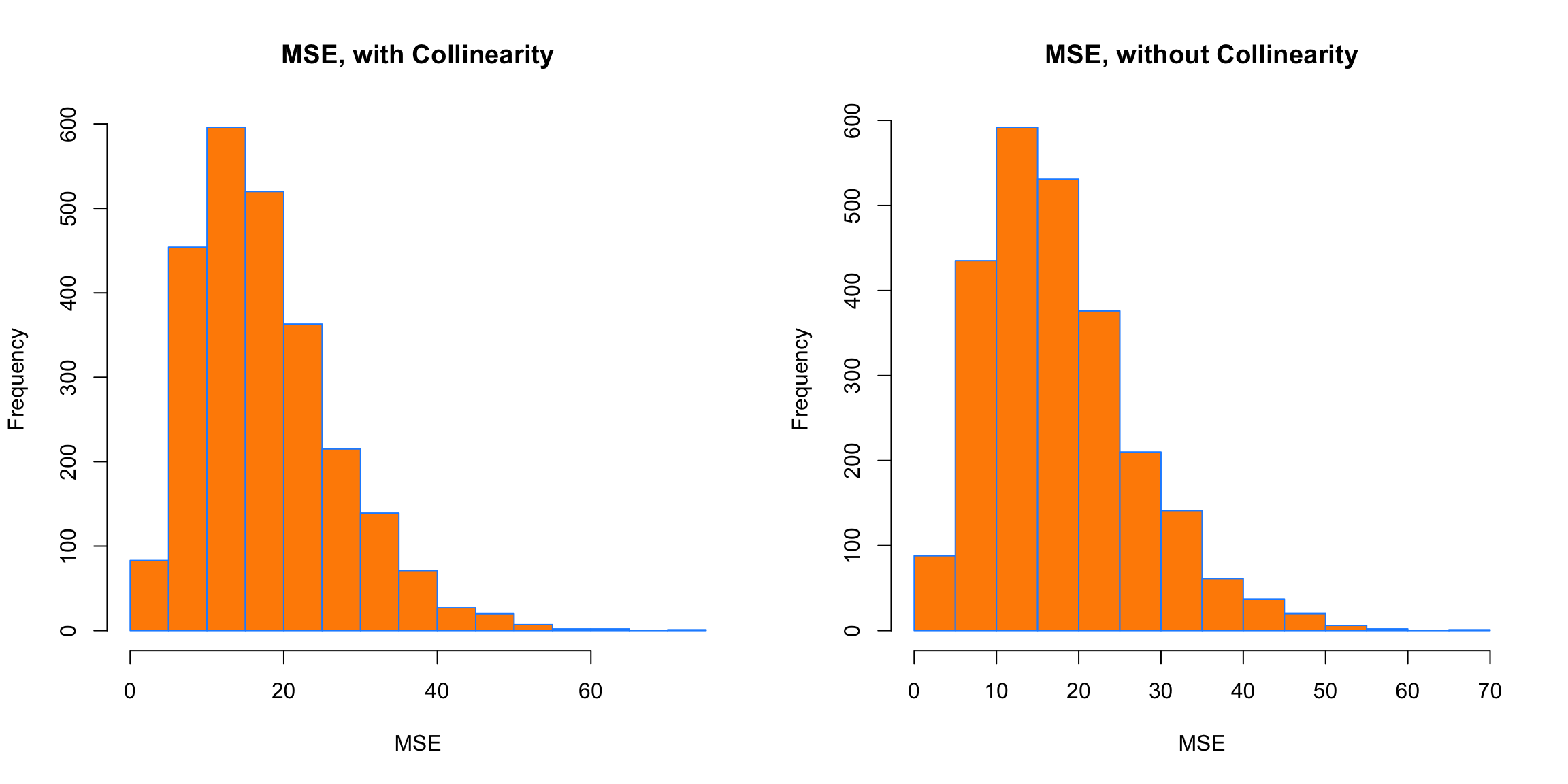 Interestingly, in both cases, the MSE is roughly the same on average. Again, this is because collinearity affects a model’s ability to explain, but not predict.

The R Markdown file for this chapter can be found here: