Chapter 5 Probability and Statistics in R

When working with different statistical distributions, we often want to make probabilistic statements based on the distribution.

We typically want to know one of four things:

This used to be done with statistical tables printed in the back of textbooks. Now, R has functions for obtaining density, distribution, quantile and random values.

The general naming structure of the relevant R functions is:

Note that name represents the name of the given distribution.

Or, to calculate the quantile for probability 0.975, use:

These functions exist for many other distributions, including but not limited to:

Where * can be d, p, q, and r. Each distribution will have its own set of parameters which need to be passed to the functions as arguments. For example, dbinom() would not have arguments for mean and sd, since those are not parameters of the distribution. Instead a binomial distribution is usually parameterized by \(n\) and \(p\), however R chooses to call them something else. To find the names that R uses we would use ?dbinom and see that R instead calls the arguments size and prob. For example:

We’ll do some quick review of two of the most common tests to show how they are performed using R.

Assuming \(\sigma\) is unknown, we use the one-sample Student’s \(t\) test statistic:

Suppose a grocery store sells “16 ounce” boxes of Captain Crisp cereal. A random sample of 9 boxes was taken and weighed. The weight in ounces is stored in the data frame capt_crisp.

The company that makes Captain Crisp cereal claims that the average weight of a box is at least 16 ounces. We will assume the weight of cereal in a box is normally distributed and use a 0.05 level of significance to test the company’s claim.

The sample mean \(\bar{x}\) and the sample standard deviation \(s\) can be easily computed using R. We also create variables which store the hypothesized mean and the sample size.

We can then easily compute the test statistic.

Under the null hypothesis, the test statistic has a \(t\) distribution with \(n - 1\) degrees of freedom, in this case 8.

To complete the test, we need to obtain the p-value of the test. Since this is a one-sided test with a less-than alternative, we need the area to the left of -1.2 for a \(t\) distribution with 8 degrees of freedom. That is,

We now have the p-value of our test, which is greater than our significance level (0.05), so we fail to reject the null hypothesis.

Alternatively, this entire process could have been completed using one line of R code.

We supply R with the data, the hypothesized value of \(\mu\), the alternative, and the confidence level. R then returns a wealth of information including:

Since the test was one-sided, R returned a one-sided confidence interval. If instead we wanted a two-sided interval for the mean weight of boxes of Captain Crisp cereal we could modify our code.

This time we have stored the results. By doing so, we can directly access portions of the output from t.test(). To see what information is available we use the names() function.

We are interested in the confidence interval which is stored in conf.int.

So, the 95% CI for the mean weight of a cereal box is calculated by plugging into the formula,

First, note that we can calculate the sample means and standard deviations.

We can then calculate the pooled standard deviation.

Thus, the relevant \(t\) test statistic is given by

But, then again, we could have simply performed this test in one line of R.

Above we carried out the analysis using two vectors x and y. In general, we will have a preference for using data frames.

We now have the data stored in a single variables (values) and have created a second variable (group) which indicates which “sample” the value belongs to.

Now to perform the test, we still use the t.test() function but with the ~ syntax and a data argument.

Simulation and model fitting are related but opposite processes.

Often we will simulate data according to a process we decide, then use a modeling method seen in class. We can then verify how well the method works, since we know the data generating process.

One of the biggest strengths of R is its ability to carry out simulations using built-in functions for generating random samples from certain distributions. We’ll look at two very simple examples here, however simulation will be a topic we revisit several times throughout the course.

This can then be calculated using R without a need to first standardize, or use a table.

An alternative approach, would be to simulate a large number of observations of \(D\) then use the empirical distribution to calculate the probability.

Our strategy will be to repeatedly:

Before starting our for loop to perform the operation, we set a seed for reproducibility, create and set a variable num_samples which will define the number of repetitions, and lastly create a variables differences which will store the simulate values, \(d_s\).

By using set.seed() we can reproduce the random results of rnorm() each time starting from that line.

If we look at a histogram of the differences, we find that it looks very much like a normal distribution. 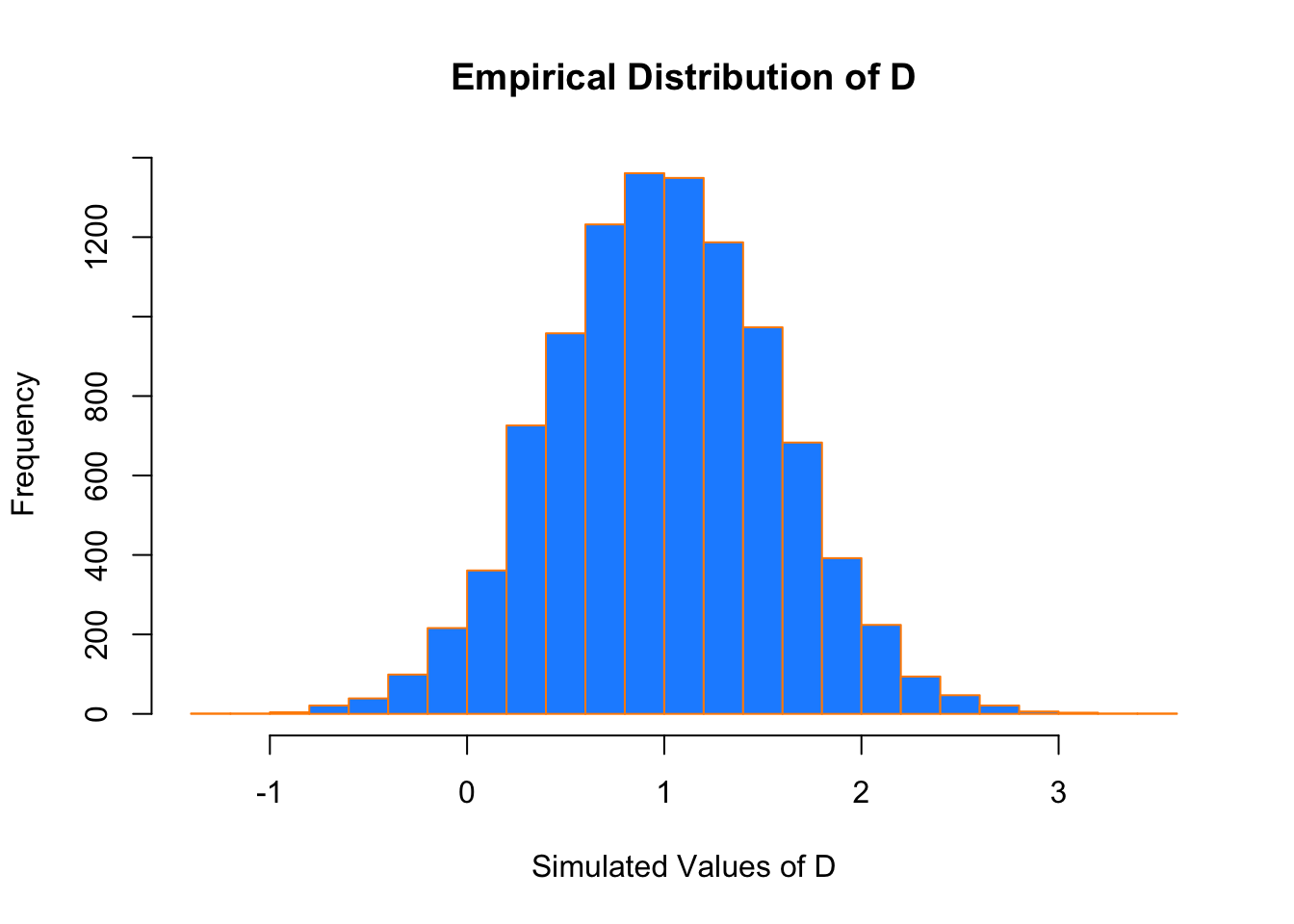 Also the sample mean and variance are very close to what we would expect.

We could have also accomplished this task with a single line of more “idiomatic” R.

Use ?replicate to take a look at the documentation for the replicate function and see if you can understand how this line performs the same operations that our for loop above executed.

We see that by setting the same seed for the randomization, we actually obtain identical results!

5.3.2 Distribution of a Sample Mean 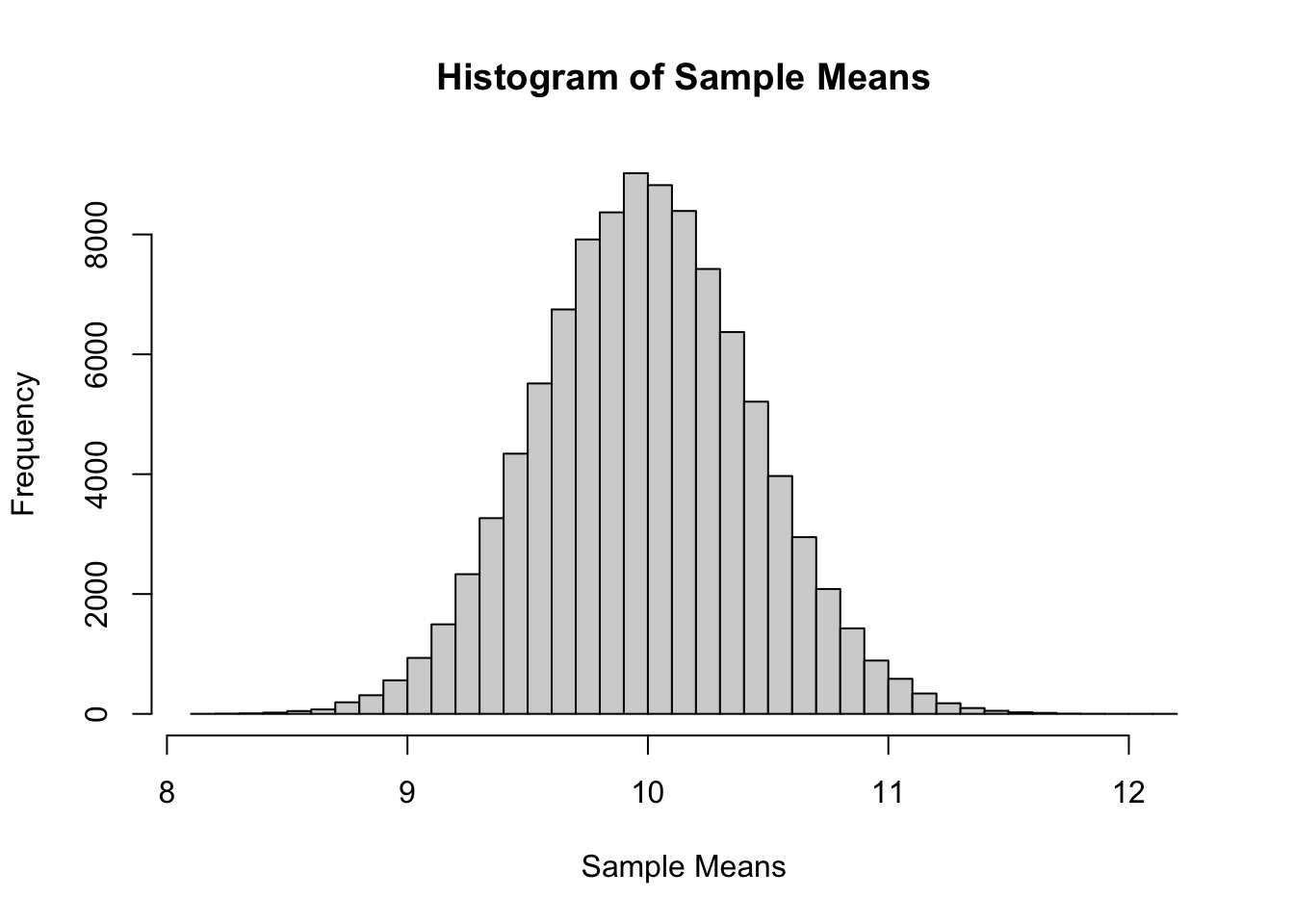 Now we will compare sample statistics from the empirical distribution with their known values based on the parent distribution.

And here, we will calculate the proportion of sample means that are within 2 standard deviations of the population mean.

This last histogram uses a bit of a trick to approximately shade the bars that are within two standard deviations of the mean.) 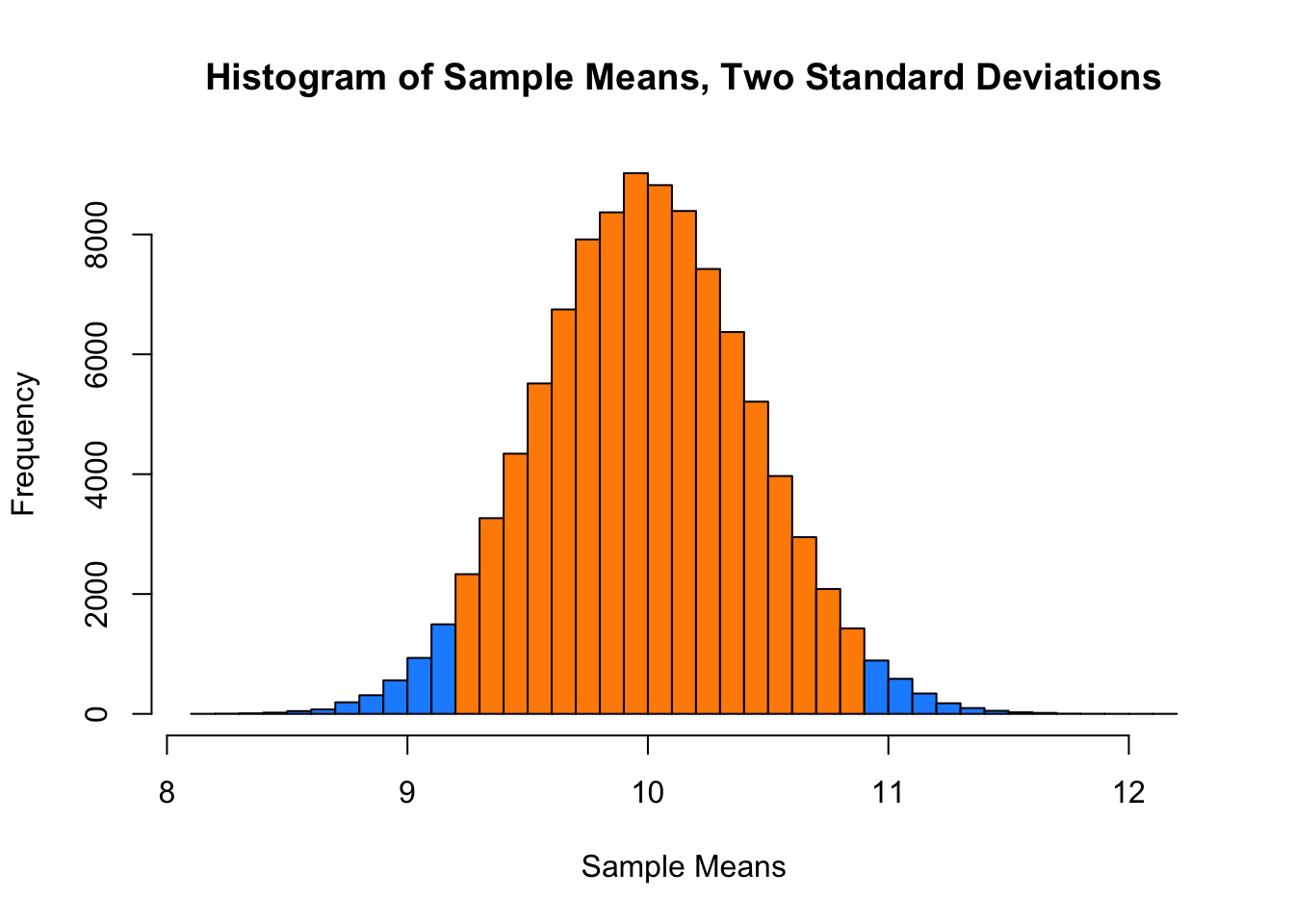